Why Can Coriander Taste Soapy?

The Chemistry of Coriander 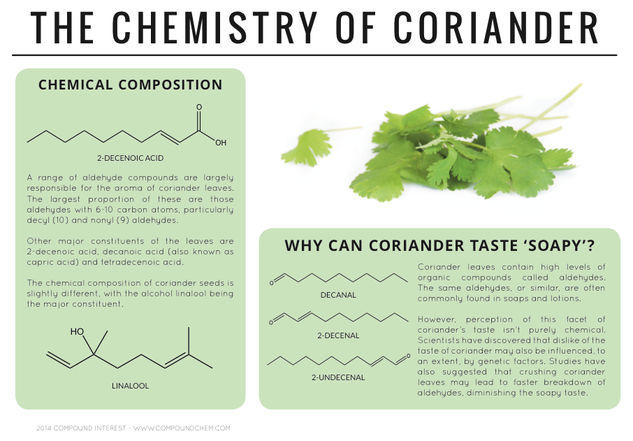 Why Can Coriander Taste Soapy? – The Chemistry of Coriander

I wasn’t aware of this until recently, being a fan of coriander myself, but apparently there are quite a few people for whom coriander (referred to as cilantro in the US) has a rather unpleasant soapy, or even metallic, taste. The cause of this has its roots in the chemical composition of coriander leaves – though, as I discovered, there are also other factors at play.

The chemical composition of the essential oil of coriander leaves has shown it to be composed of around 40 different organic compounds, with 82% of these being aldehydes, and 17% alcohols. The aldehydes are mainly those with 9-10 carbon atoms, and it is these that are largely responsible for the aroma of coriander leaves – as well as its perceived soapy taste for some people.