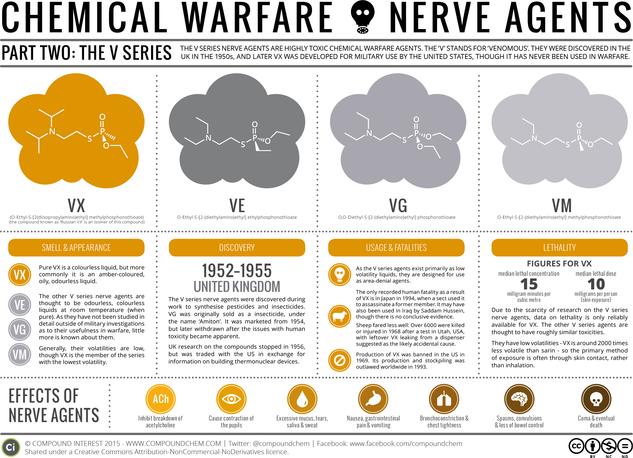 It’s been a little while since the last post on chemical warfare agents on the site, in which we looked at the G series nerve agents, including sarin and tabun. The second of the two graphics looking at nerve agents focuses this time on the V series, including the infamous VX.

The V series compounds were synthesised after World War II, unlike the G series compounds. Like the G series, they were essentially discovered by accident; scientists in the UK in the 1950s aiming to synthesise new pesticides and insecticides stumbled across a series of organophosphate compounds, which appeared to be good candidates for these uses. In fact, one of them, branded ‘Amiton’, was marketed as an insecticide from 1954, although it was fairly rapidly withdrawn after the human toxicity of the compound, now known as VG, became apparent.

By the time this occurred, it was clear that this particular set of organophosphate compounds were of far too great a toxicity to have any agricultural use. However, the British military had gotten wind of the high toxicity of the compounds, even before Amiton’s release, and requested further information. They carried out tests which eventually led to the development of VX, and the naming of the series of compounds as the V (venomous) agents.