The Chemistry of Fireworks 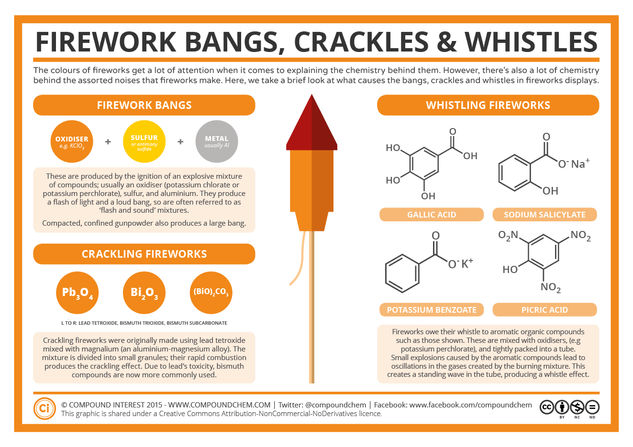 The obvious place to start is the bangs of fireworks when they explode into bursts of colour. These can be produced simply by compacted gunpowder, which if suitably confined can give a decent result. However, it’s more common for the ignition of a specific explosive mixture to be utilised. This mixture contains three main components: an oxidiser (such as potassium chlorate), sulfur (or antimony trisulfide) and metal pieces (commonly aluminium).

These compositions are known as ‘flash and sound’ compositions for rather obvious reasons. The oxidiser provide oxygen as it decomposes, and the metal acts as the fuel, producing a rapid, explosive reaction. These compositions are notably dangerous; those made with potassium chlorate as the oxidiser have low ignition temperatures (as low as 200˚C), and even those made with potassium perchlorate are hazardous. As such, the mixture is usually created remotely.

Another common sound effect in fireworks displays is the fizzling, crackling sound. These fireworks use a slightly different composition to achieve the effect. Originally, lead tetroxide was one of the compounds used in this composition, but due to the toxicity of lead compounds, in the present day it’s more common for compounds like bismuth trioxide and bismuth subcarbonate to be utilised instead. These compounds are mixed with magnalium (an alloy of aluminium and magnesium).