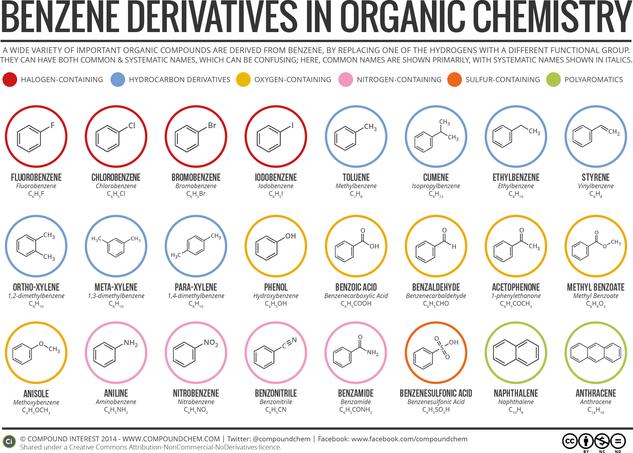 Benzene is a hugely important compound in organic chemistry. It consists of six carbon atoms joined together in a ring, with a hydrogen atom bonded to each carbon; by replacing one or more of these hydrogens with a functional group, a large number of different compounds can be formed. This graphic looks at a selection of the most common simple derivatives which can be obtained in this manner.

Compounds that contain benzene rings in their structures are commonly referred to as ‘aromatic compounds’. This terminology derives from the fact that they are often have a pleasant and sweet fragrance (although benzene itself does not), but the more modern definition of the word relates to the the structure of molecules. Put simply, it refers to cyclic arrangements of bonded carbons that are conjugated – that is, they are joined by alternating double and single bonds. Whilst the criteria for a compound to be termed aromatic are a little more complicated than this, it serves as a serviceable, simple definition.