A Brief Guide to Types of Organic Chemistry Formulae 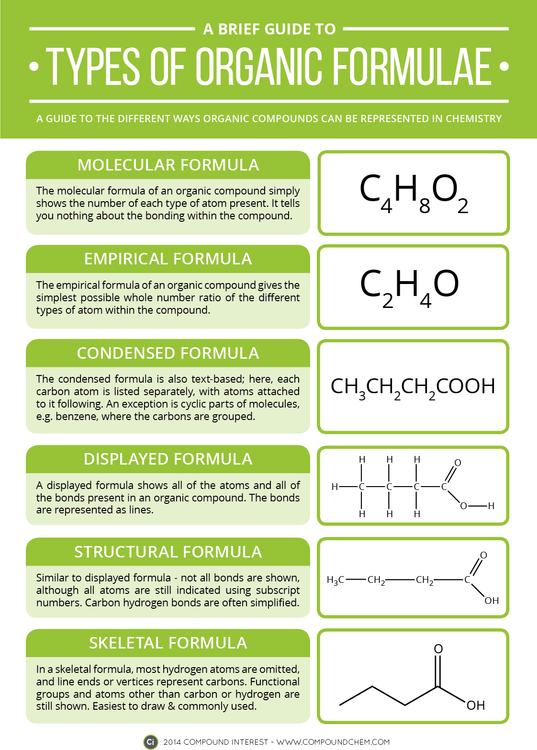 A Brief Guide to Types of Organic Chemistry Formulae

Back to basics with today’s graphic, with a look at the different ways compounds in organic chemistry can be represented. Obviously, if you’re a chemist, these will all be second nature, but as was quite fairly pointed out with regards to the food chemistry graphics, if you’re not well versed in chemistry, all of those lines and letters might well be a bit perplexing. Here’s a brief explanation of what they mean.

The molecular formula of a compound gives the exact number of each different type of atom (i.e. type of element) present in one molecule of the compound. This is useful because it allows you to work out the molecular weight of the compound, but can also be restrictive. It doesn’t give you any information about the bonds in the molecule, and, depending on how it’s written, might not even tell you about which functional groups are present. Functional groups are the parts of the organic molecule that dictate its particular reactivity with other chemicals; they were covered in a previous post on the site.

The empirical formula is the simplest ratio of the elements present in a molecule. They are of some use for organic compounds – they can sometimes help us work out the molecular formula if we don’t know it. However, they are much more frequently used for ionic compounds, such as table salt, sodium chloride (NaCl). Ionic compounds have giant lattice structures – a large number of oppositely charged ions electrostatically attracted to each other. It wouldn’t be practical to try and write down the exact number of each type of atom present in a crystal of salt, because the number would be huge – so we just use the simple empirical formula instead.

The condensed formula is often used in text, and was particularly used in early organic chemistry publications, where use of graphics was limited. Each carbon in the molecule is written out in turn, with the atoms attached to it written directly after. Brackets are used to indicate branching in the molecule, or multiple identical groups. The condensed formula is sometimes seen for simple cyclic compounds, but representing them using this formula tends to just look confusing, so it’s uncommon.

The displayed formula and structural formula are fairly similar. The displayed formula represents the molecule by showing all of the atoms, and all of the bonds between those atoms. Bonds are represented by lines, with the number of lines representing the strength of the bond. Single bonds and double bonds (2 lines) are relatively common, but triple bonds (3 lines) are also possible in some molecules. These are obviously useful, in that they show the molecule in as much detail as possible, but they also take up a lot of space, and can be time-consuming to draw. The structural formula attempts to tackle this by omitting some bonds, and grouping some atoms together, but still isn’t the quickest way to represent an organic molecule.

The skeletal formula is the simplest way of representing organic molecules, and as such is commonly seen in both textbooks and research publications. It involves representing the main carbon chain as a zig-zagging line, where the end of lines and the vertices represent carbon atoms. All hydrogens are omitted, unless they are part of a functional group, which are always shown; atoms other than carbon or hydrogen are also always shown.