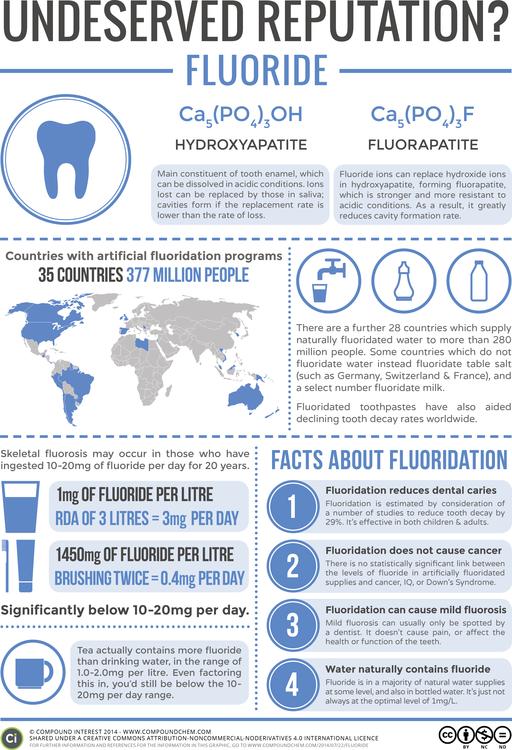 This graphic is the first in a series I’m hoping to make on chemicals with potentially undeserved reputations. In it, I’ll look at the evidence and research on each, and try to come to some kind of rational conclusion as to whether or not their bad reputation amongst the general public is deserved. I thought I’d kick things off with one of the most controversial topics, particularly over in the USA: the fluoridation of water supplies.

The reason for wanting a fluoridated water supply in the first place is the first thing we should consider, and it’s based on the chemical structure of your teeth. The enamel that coats your teeth is made up primarily of the compound hydroxyapatite. This ionic compound consists of calcium ions, phosphate ions and hydroxide ions, and is also a major component of your bones. Enamel is well known for being pretty strong, but it can be slowly broken down and lose ions from its structure under acidic conditions. This is known as demineralisation. Our body has a built-in countermeasure for this, and can replace the ions lost with ions from our saliva, in a process known as remineralisation. However, sometimes the rate at which this replacement occurs is below that at which the ions are being lost. When this happens the pores in the tooth can become enlarged, and cavities and tooth decay can result.