The Chemistry of Body Odours 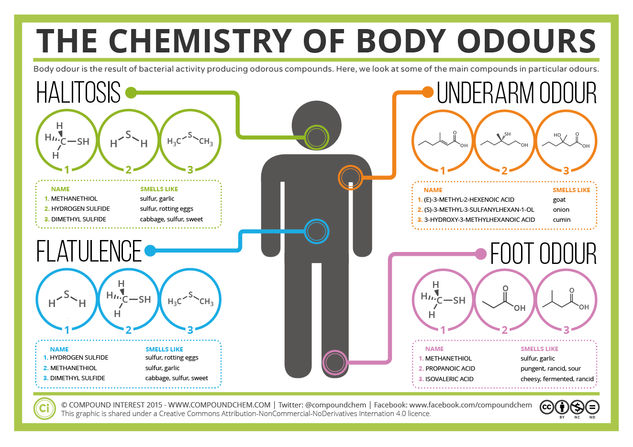 In the majority of cases, the cause of bad breath, or halitosis, is the product of bacteria in the mouth. These bacteria produce waste products, and it’s these chemical compounds that contribute towards halitosis.

Sulfur-containing organic compounds are again to blame for the variety of odours produced in the digestive system. The main sulfur-containing compound here is hydrogen sulfide, followed by methanethiol & dimethyl sulfide, all of which we’ve already met.

Your underarms are home to an estimated one million bacteria per square centimetre; these convert your otherwise odourless sweat into a variety of malodourous molecules.

Again, sweat is a major player in foot odour – however, as with underarm odour, it’s due to the fact that it provides a beneficial environment for bacteria to grow, and it’s the compounds that these bacteria produce that cause the perceived odour.