The Chemical Compounds Behind the Smell of Flowers 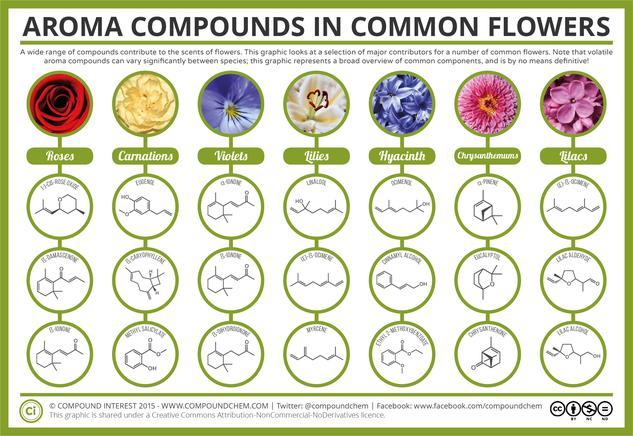 The Chemical Compounds Behind the Smell of Flowers

Their scent is majorly influenced by compound named after the flower, (-)-cis-rose oxide. This molecule is a particular isomer of rose oxide (which has 4 different isomers), and the one which contributes the typical floral rose fragrance.

Carnations, too, are a common component of floral bouquets. In comparison to roses, their scent is much fainter; the major aroma chemicals that make up this scent are eugenol, beta-caryophyllene, and benzoic acid derivatives.

Violets are perhaps less common in bouquets than roses and carnations, but perhaps much more interesting from an aroma perspective. Their scent is primarily caused by the presence of compounds called ionones.

Their composition is varied across different species, but across the genus (E)-beta-ocimene and linalool are major components of the aroma.

Three compounds are particular contributors to the scent of hyacinth. Ocimenol has a scent described as fresh and citrusy, whilst cinnamyl alcohol has a balsamic odour. Another compound, ethyl 2-methoxybenzoate, adds a floral, fruity aspect to the scent.

Terpene compounds such as alpha-pinene, eucalyptol, camphor, and borneol have all been found in varying quantities in different species. Compounds named after chrysanthemums themselves are also present; chrysanthenone and chrysanthenyl acetate are both contributors.

Lilacs are another flower which lend their name to the chemical compounds that their aroma contains. Whilst (E)-beta-ocimene is the major component of their fragrance, it is also contributed to by lilac aldehyde and lilac alcohol.