The Chemistry of Sparklers 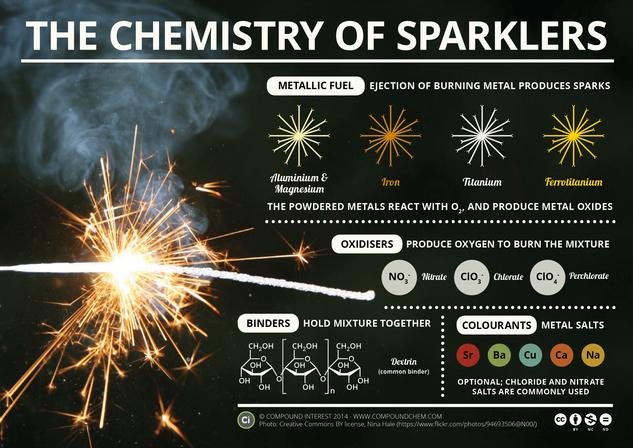 The Chemistry of Sparklers

It’s Fireworks Night here in the UK tomorrow, which means fireworks (obviously), bonfires and sparklers. We’ve looked at fireworks in a previous post, so this time around it’s time to take a look at the chemicals that go into producing sparklers, and their various roles.

In sparklers, there are three main components to the composition: a metal fuel, an oxidiser, and a binder. There are also other optional components that can be included in the mixture in order to modify the effect. The wire that forms the body of the sparkler is often made of iron, and the afore-mentioned composition is introduced to this wire as a paste, in which the wire can be coated.

The oxidiser in the sparkler plays an important role; they are often metal nitrates, chlorates, or perchlorates, with potassium nitrate being a very common example. When heated, these oxidiser compounds decompose, and when they do so they all, regardless of their identity, produce oxygen as one of the products of the decomposition. The production of gases during the decomposition reaction also forcibly ejects bits of the burning powdered metal from the sparkler. This causes the sparkler’s effect, as they continue to burn, and react with oxygen to produce metal oxides.