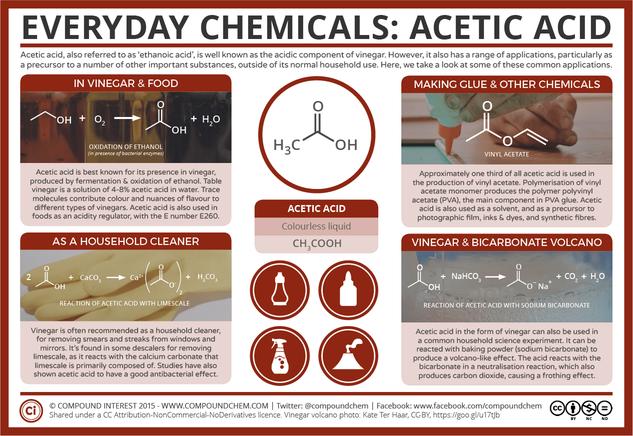 Acetic acid also has the name ethanoic acid, though this is less commonly used. Most people will know of its presence in vinegar, from which its name is derived – it originates from the latin word for vinegar. In vinegar acetic acid is generated by fermentation, which produces ethanol, and then subsequent oxidation of this ethanol. The method of acetic acid’s production by the oxidation of ethanol also helps explain why wines can begin to taste vinegary if the bottle is left open.

Vinegars will contain between 4-18% acetic acid; table condiment varieties tend to have a maximum concentration of 8%, with the commercial vinegars used for pickling slightly stronger. The remainder of the vinegar is simply water, with trace compounds providing colourings and nuances in flavour, in cases such as malt vinegar and balsamic vinegar. The significant differences in different vinegars stem from their origin. Malt vinegar, popular in the UK, is created from malted barley (much like beer), whilst balsamic vinegar is made from white grape juice, then aged in barrels.