Chemistry on a Comet 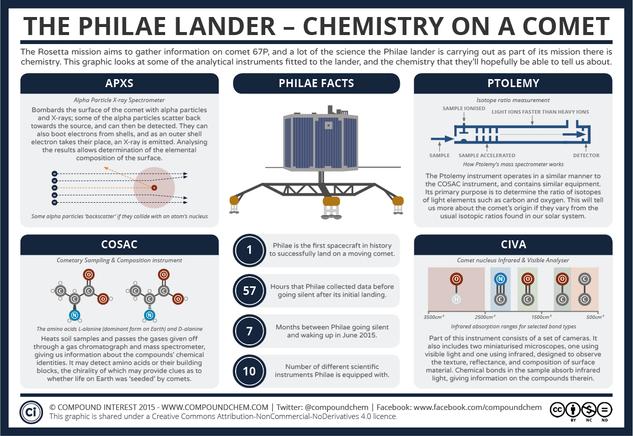 The Philae Lander – Chemistry on a Comet

You’ve probably heard the great news over the weekend that the European Space Agency’s Philae lander has awoken from its 7 month slumber on Comet 67P, and is once again relaying collected data back to Earth. You might have less of an idea, however, of what this data is, and why it’s important. This graphic looks at some of the chemical information Philae is hoping to collect, and how it will collect it.

Philae is equipped with ten different scientific instruments, accounting for just over a quarter of its weight. Four of these instruments have a particularly chemistry-oriented role. These are APXS, COSAC, Ptolemy, and CIVA. Their names are almost all acronyms, which can make their exact purpose initially obscure, but here we’ll take a look at each in turn, and what they’re hoping to find on Comet 67P.